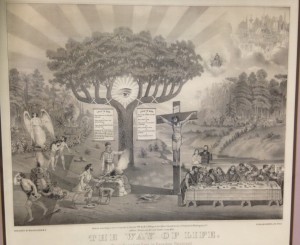 Note: In the picture above you can see the All-seeing Eye spying on the believers. This is a pagan symbol  adopted by the Adventists.

Albert G. Mackey (1807-1881): “All-seeing eye. An important symbol of the Supreme Being, borrowed by the Freemasons from the nations of antiquity. Both the Hebrews and the Egyptians appear to have derived its use from that natural inclination of figurative minds to select an organ as the function which it is intended peculiarly to discharge. Thus the foot was often adopted as the symbol of swiftness, the arm of strength, and the hand of fidelity. On the same principle, the open eye was selected as the watchfulness, and the eye of God as the symbol in this sense is repeatedly to be found in the Hebrew writers. Thus the Psalmist says (Ps. XXXIV. 15): “the eyes of the lord are upon the righteous,…” which explains a subsequent passage (Ps CXXI. 4), in which it is said: “Behold, he that keepeth Israel shall neither slumber nor sleep” (An Encyclopedia of Freemasonry, p. 47, [1878] 1914).

Albert G. Mackey (1807-1881): “On the same principle, the Egyptians represented Osiris, their chief deity, by the symbol of an open eye, and placed hieroglyphic of him in all their temples… The All-seeing Eye may then be considered as a symbol of God manifesting his omnipresence – his guardian and preserving character – to which Solomon alludes in the Book of Proverbs (XV. 13) when he says: “The eyes of the Lord are in every place, beholding (or, watch upon) the evil and the good. It is a symbol of the Omnipotent Deity” (Ibid., p. 48). 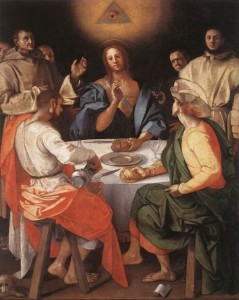 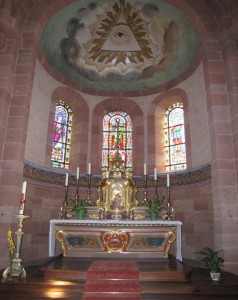 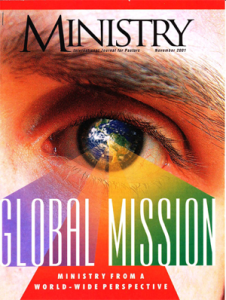 Jean-Jacques-Francois Le Barbier, 1789, declaration of the rights of Man, France

Thomas Smith Webb (1771-1881): “Although our tghoughts, words and actions may be hidden from the eyes of man, yet the All-Seeing Eye,  whom the Sun, Moon and Stars obey, and under whose watchful care even Comets perform their stupendous revolutions, pervades theit inner most recesses of the human heart and will reward us according to our merits” (The Freemasons Monitor, 1797).

In the first stage (Illustration38) it was a simple tree with the Ten Commandments on two main branches. In the second stage (Illustration 39)    the two parts of the Law were hung to the tree. But in neither of the trees was the spying, “All-seeing eye”. In the third stage more details were added, including the All-seeing Eye, depicting the panorama of salvation, and the painting was titled The Way of Life (Illustration No.40). 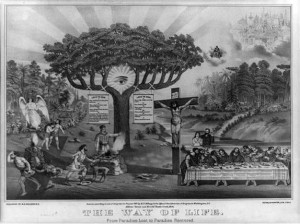