1. Lucifer had a closest resemblance to God

Christopher Reyes: Cites Thomas Aquinas (1225-1274 AD): “The Angel,” writes Saint Thomas, “Is the most excellent of all creatures because among all creatures he bears the greatest resemblance to his creator. The glossa on Ezeckiel, 28, ‘Thou wast the seal of resemblance, says: The more subtle their nature [the Angelic nature], the better the image of God found expressed in them’” (In His Name, p. 192, 2010).

2. The cause of Lucifer’s rebellion

Ellen White (1827-1915): “The great Creator assembled the heavenly host, that he might in the  presence of all the angels confer special honour upon His Son….The Father then made known that it was ordained by Himself that Christ, His Son, should be equal with Himself,…His Son He had invested with authority to command the heavenly host. Especially was His Son to work in union with Himself in the anticipated creation of the earth,…Lucifer was envious and jealous of Jesus Christ….He  thought….why should Christ thus be honoured before himself?….[So] They rebelled against the Son” (SR, pp. 13-15, 1947).

Daniel Defoe (1660-1731): “Hence that notion (and not ill-founded); namely, that the first cause of his disgrace, and or which ensued his rebellion, was occasioned upon God’s proclaiming his son generalissimo, and with himself supreme ruler in heaven; giving the dominion of all his works of creation, as well as already finished, as not then begun, to him; which post of honour (say they) Satan expected to be conferred on himself, as next in honour, majesty, and power, to God the supreme” (The History of the Devil, p. 25, 1854 [first published in1726]).

The following illustrations exactly portray what Ellen White had seen in her vision. Here we have an example of her indebtedness even to paintings sculptures.  Illustration No. 14. is from John Milton’s Paradise Lost, – a book from which she drew material for her Great Controversy themes. 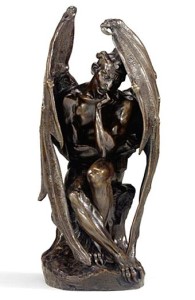 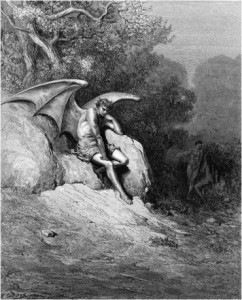 4. Christ has been made equal with the Father

Ellen White (1827-1915): “Angels that were loyal and true sought to reconcile this mighty, rebellious angel to the will of his Creator. They justified the act of God in conferring honor upon Jesus Christ, and with forcible reasoning sought to convince Satan that no less honor was his now than before the Father had proclaimed the honor which he had conferred upon his Son. They clearly set forth that Jesus was the Son of God, existing with him before the angels were created; and that he had ever stood at the right hand of God,…They anxiously sought to move Satan to renounce his wicked design and yield submission to their Creator; …Satan refused to listen” (1SP, pp. 19, 20, 1870).

Ellen White (1827-1915): “Then Satan exultantly pointed to his sympathizers, comprising nearly on half of all the angels, and exclaimed, “These are with me! Will you expel these also, and make such a void in heaven?” (Story of Redemption, p. 18)

6. Satan became the monarch of the world