The Ascension of Christ

1. The disciples and the mother of Jesus witnessed the ascension

Ellen White (1827-1915): “The disciples, with the mother of Jesus, witnessed the ascension of the Son of God” (1SG, p. 79, 1858). The paintings below portray Mary as a witness to the ascension of Jesus, a belief that had been common centuries before Ellen White. This only proves Ellen White’s insight on this point to be a common notion of her times. 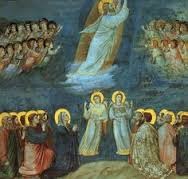 Bennett James (1774-1862): “Some have thought that the hundred and twenty, who are mentioned immediately after the return of the Apostles, were spectators; and it would have been peculiarly grateful to the mother of Jesus to see what was become of him who took flesh of her, but other counsels may have been deemed wiser by infinite mind” (Lectures on The History of Jesus Christ, p.  580, 1828).

Note: According to the book of Acts Jesus chose to ascend before his eleven disciples.

2. He was received into heaven by Cherubims and Seraphims

Ellen White (1827-1915): “After His resurrection Christ ascended to His appointed honor. As He rose from the earth, His hands were outstretched in blessing to His disciples. And while they stood gazing upward to catch the last glimpse of their ascending Lord, He was received into the rejoicing throng of cherubim and seraphim. As these heavenly beings escorted their Lord to His home, they sang in triumph, “Sing unto God, ye kingdoms of the earth; O sing praises unto the Lord; … to Him that rideth upon the heavens of heavens.”  God desired to impress the minds of the believers with the glorious reception accorded to His Son in the home He had left” (ST, January 4, 1899).

Ascension in the presence of His eleven disciples – Acts 1, 9-11

John Harris (1802-1856): “The Almighty would signalize the enthronement of Christ in the eyes of the universe; would impress the minds of the believers with the glorious reception which their Head had met with on his return to heaven… At the point where he vanished from the view of mortals, he was joined by the rejoicing ranks of the cherubim and seraphim; he found them arranged to receive him… and to conduct him in triumph to his glorious throne… they called on earth to assist them in the mighty task, ‘Sing unto God, ye kingdoms of the earth: O sing praises unto the Lord; to him that rideth upon the heaven of heavens’” (The Great teacher, pp. 177, 178, 1837).

Ingraham J. H (1809-1860): “His kingdom is therefore, my father, clearly not of this world, as he said to Pilate, the Procurator; but it is above. To it he has triumphantly ascended, attended by legions of Cherubim and Seraphim, an ascent which David clearly foresaw in vision” (The Prince of The House of David, p.453, 1855).

3.   The glory of His ascension was veiled from their eyes

Ellen White (1827-1915): “The disciples not only saw the Lord ascend, but they had the testimony of the angels that he had gone to occupy his Father’s throne in Heaven… and the glory of Christ’s ascension was veiled from human sight. The brightness of the heavenly escort, and the opening of the glorious gates of God to welcome him, were not to be discerned by mortal eyes. Had the track of Christ to Heaven been revealed to the disciples in all its inexpressible glory, they could not have endured the sight. Had they beheld the myriads of angels, and heard the bursts of triumph from the battlements of Heaven, as the everlasting doors were lifted up, the contrast between that glory and their own lives in a world of trial, would have been so great that they would hardly have been able to again take up the burden of their earthly lives, prepared to execute with courage and faithfulness the commission given them by the Saviour” (6Red, p. 72, 1877).

William Hanna (1808-1882): “That cloudy chariot bore him away, till he was ‘received up into heaven, and sat down on the right hand of God.” How simple, yet how sublime, how pathetic this parting! No disturbance of the elements, no chariot of fire, no escort of angels; Nothing to disturb or distract the little company from whom he parts… who shall tell us what happened above, beyond, on the way to the throne; in what new form of glory, by what swift flight, attended by what angel escort, accompanied by what burst of angelic praise, that the throne of the universe was reached? … ‘Think not with eyes like yours to pierce that cloud which hides the world of spirits from mental vision. Enough for you to know that this same Jesus shall so come in like manner as ye have him go’”  (The Life of Christ, pp. 859, 860, 1863).

John Henry Kurtz (1809-1890): “Then he lifted up his hands, and blessed them, and while they beheld, he was taken up, and a cloud received him out of their sight, concealing from the feeble eyes of the disciples the incomprehensible and exalted mystery of his glorification” (Manual of Sacred History, p. 353, 1854).

Henry Kollock (1778-1819): “Who can conceive the varied emotions which filled the breasts of the disciples as their eager and longing eyes followed the majestic accession of their Lord? … in the mean time Jesus ascends to his throne. Myriads of angels are his convoys and attendants. The gates of heaven are lifted up, the everlasting doors are unfolded, and the King of Glory enters in! Shall I paint you the acclamations that resound through the arch of heaven? Shall I show you your Saviour approaching the Eternal Throne, and sating, “Father, I have finished the work which thou gavest me to do? Alas! These are subjects which we can neither describe nor conceive” (Sermons on various Subjects in Four Volumes, pp. 429, 430, 1822)

4. His ascension was without outward show

Ellen White (1827-1915): “They were to keep distinctly before their minds the beauty and majesty of His life, the perfect harmony of all His attributes … It was better that the earthly acquaintance of the disciples with their Saviour should end in the solemn, quiet, and sublime manner in which it did. His visible ascent from the world was in harmony with the meekness and quiet of His life (3SP, p. 255, 1878).

Henry Kollock (1778-1819): “He [Elijah] was carried up by a whirlwind into heaven, in a fiery chariot with horses of fire. But when Jesus Christ, the founder of a milder economy, whose office it had been to announce the divine grace and compassion; when he ascended, there was nothing terrible and appalling: everything was mild, calm, and accordant with the character of him who “came not to destroy men’s lives, but to save them”” (Sermons on Various Subjects in Four Volumes, p. 429, 1822).